In 2005, Hardin County Water District No. 1 assumed ownership and management of a wastewater treatment plant a decade after it was built on Fort Knox, Ky.  The district spent the next 14 years replacing and upgrading equipment, installing new technology and streamlining processes to improve operational efficiency without impairing the plant’s performance. 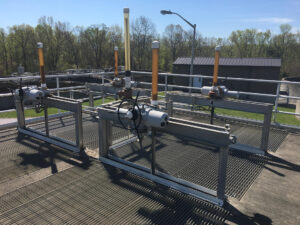 Originally, water flowed into the facility’s preliminary treatment building and then through bar screens, grit mixers, pumps and conveyors through two channels that were never closed. By installing devices to open and close gates to the channels, the district was able to increase efficiency and operate only one of the two channels and its associated equipment under normal flow. When the flow is high, the gate to the second channel opens and all of its related equipment starts automatically. Similarly, adding variable frequency drives to all three of the facility’s wet well pumps allowed just one of the pumps to run constantly during normal flow conditions, eliminating the need to start and stop all three pumps multiple times each day.

The district found several ways to reduce equipment’s operating time without hindering performance, such as operating the facility’s digester blower for 12 rather than 24 hours day, thereby reducing the number of necessary brush aerators running in the oxidation ditch from four to two. The district also lowered the number of clarifiers and return activated sludge pumps that ran during normal flow days from two to one. This resulted in a great reduction in energy usage but without compromising performance.

To further lower electricity use and costs, the district replaced all conventional outdoor lighting with LED bulbs through which it realized an electricity savings of 34 percent  The widespread installation of more efficient lighting also eliminated the labor involved in replacing less long-lasting bulbs. 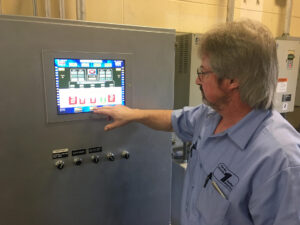 Finally, the district replaced its gas disinfection system with a safer, ultraviolet (UV) system, which both improved employee safety and eliminated the cost of purchasing and using chemicals.

These and countless other measures the district introduced allow Fort Knox’s waste water plant to operate much more efficiently while maintaining the plant’s productivity.  In addition to reducing the amount of power needed to treat waste, the district introduced technical and logistical improvements to use less equipment more effectively, thereby lowering long-term operation and maintenance costs.